In the Global Financial Crisis, the Fed quickly dropped interest rates to zero and introduced new unconventional approaches to monetary policy.  The first of four rounds of quantitative easing began in November 2008.  Once started, the Fed had a hard time ending its purchase programs without creating instability in the financial markets.

In May 2013, Fed chairperson, Ben Bernanke appeared before the Joint Economic Committee of Congress and suggested that the Fed could start tapering its bond purchases ‘in the next few meetings.” His remarks caused the well known ‘taper tantrum.’  US interest rates rose in anticipation of a policy change and funds flowed out of emerging markets.  As a result, the Fed hesitated and the actual tapering did not begin until January 2014 and asset purchases ended in October.  All in all, there were about $4 trillion in asset purchases through the four rounds of QE and the  Fed’s balance was five times larger than its pre-crisis level. 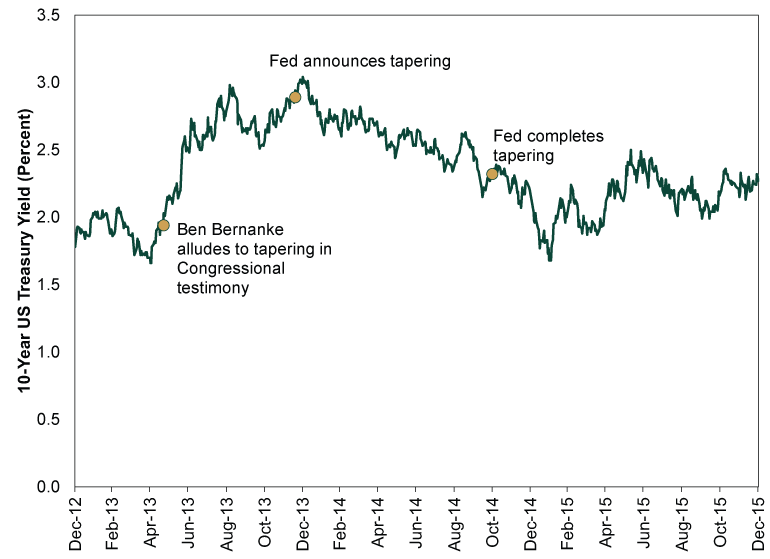 The tantrum had only a small effect on US interest rates.  As seen in Figure 1, the 10 year Treasury rate rose after Bernanke’s announcement and then fell through 2014.  There were larger effects in emerging markets.  Net private capital inflows into emerging markets fell about 20% in 2014.   Emerging market equity returns in the two years after the taper tantrum speech were -1% compared to +24% in developed markets.  Moreover, there was wide variation among emerging markets.  Returns in this period were positive in China but both Brazil and Russia experienced losses of about 30%.

Why should investors be interested in the taper tantrum episode at the end of the great recession?   The Fed resorted to the same unconventional monetary policies when the Covid pandemic occurred.  Interest rates were quickly dropped to zero in March 2020 and the Fed embarked on almost unlimited asset purchases.  The Fed balance sheet now (October 2021) stands at $8.56 trillion, twice the pre-pandemic level.   In recent months, the Fed has been buying $120 billion of government and mortgage securities.  With the economy in recovery, inflation exceeding expectations and the pandemic waning, the time to reverse course is fast approaching.

Will there be another taper tantrum when the Fed begins to taper starting this month?  Which emerging market economies would be more seriously affected?  It is hard to answer the first question although we do know that Fed officials have worked hard to prepare the markets with numerous speeches hinting that tapering is coming.  To answer the second question, we can refer back to the 2013 taper tantrum and ask which macroeconomic indicators were related to differences in emerging market equity returns.  We will look at the performance of five key indicators in 2013 and then examine how emerging markets stack up today:

For each indicator, Table 1 shows the correlation of the indicator level prior to May 2013 with emerging market equity returns in US dollars in the subsequent two-year period.

Countries that started the period with a current account surplus tended to perform better.  The ratio of international or FX reserves to GDP is a less reliable indicator.  For the countries shown the correlation of future returns with the current account to GDP ratio is 0.44 and for the international reserves it is 0.13 (though this rises to 0.39 if one big outlier, Egypt, is removed).

We expect that countries with overvalued real exchange rates will underperform.  If the exchange rate returns to normal, the depreciation results in negative equity returns in dollar terms. Table 1 show that this relationship was weak in the 2013 episode.

The last two indicators are credit measures.  Table 1 shows that countries with high levels of external debt to GDP tended to underperform; the correlation with equity returns was -0.43.  There is also a strong negative correlation (-0.55) between growth in the ratio of domestic credit to GDP and subsequent equity returns.

The last two indicators are credit measures.  Table 1 shows that countries with high levels of external debt to GDP tended to underperform; the correlation with equity returns was -0.43.  There is also a strong negative correlation (-0.55) between growth in the ratio of domestic credit to GDP and subsequent equity returns.

The five indicators were reasonably informative in distinguishing the equity market winners from losers following the 2013 taper tantrum. With tapering starting this month, these same indicators might tell us which emerging markets are vulnerable to the effect of higher US interest rates and capital flow reversals that might affects the equity returns in 2022. Table 3 shows the most recent values for each of the five indicators and the composite index (using the weights that performed well in 2013).

With recent central bank emphasis on policy communication (‘forward guidance’), a repeat of the 2013 taper tantrum might be unlikely. Nevertheless, emerging markets might be vulnerable and some more so than others:

Disclosures: The comments contained herein are the opinions of the author, a consultant to DCM Advisors, LLC, and may not represent the opinions of DCM Advisors. Comments are provided for informational purposes only and are subject to change without notice. Nothing contained herein constitutes an offer to sell or a solicitation of an offer to buy any security or any interest in DCM Advisors vehicle(s). The information contained herein has been obtained from sources believed to be reliable but is not necessarily complete and its accuracy cannot be guaranteed. All investments are subject to the risk of loss, including the potential for significant loss, and it should not be assumed that any models or opinions incorporated herein will be profitable or will equal past performance. These materials are the exclusive property of DCM Advisors. Unless otherwise expressly permitted by DCM Advisors in writing, this information should not be distributed to any other parties.